If you are the proud owner of a FrSky R9M long range transmit module or if you are deciding to buy one there will be that moment that you are asking yourself:

” Should I buy the FrSky R9 MM or the R9 Mini receiver? What is the difference?”

In this article we will make your life easier and help you to decide which receiver is best for you and what the differences are.

What’s the same between the FrSky R9MM and R9 Mini receiver?

Technically, as can been seen in the comparison table above, both receivers are also pretty much the same. Both offers support for the FrSky ACCESS and ACCST protocol by flashing with the right firmware. Both put out 8 or 16 SBUS channels (based on the used mode). Both offer 4 PWM channels. Both receivers support Smart port and Fport. OTA (over the air update) is possible by using the ACCESS firmware.

What’s the difference between the FrSky R9MM and R9 Mini receiver?

This is the part that you were actually looking for. What is the difference between the R9MM and R9 Mini? In fact, the only difference is that one of the pins (pads) on the PCB have a different purpose between the two receivers.

What’s the purpose of the Inverted Smart Port on the R9MM?

Without getting to technical, communication between a receiver and a flight controller works by sending a binary 1 or binary 0 from one pin to another. The receiver sends this 1 or 0 by varying the voltage on a pin. Traditionally, industry standards specified that a binary 1 would be VCC (e.g. 3.3V), while a binary 0 would be GND (e.g. 0V). So suppose that the receiver wants to send 101 to your flight controller, it would do so by sending 5V – 0V – 5V. Please note that this is higly simplified and only for basic understanding.

What’s the purpose of the SBUS In pad on the R9 Mini?

The SBUS in pad on the R9 Mini makes it possible to use redundant (two) receivers on one model. In case one receiver or link fails, the other receiver will be used. A short video about the basics of how this works can be seen below.

I would say that 99% of the fliers should go for the R9 MM. Thanks to the inverted and uninverted smart port pad the FrSky R9 MM can be used with every flight controller without the need for external hardware inverters of build-in inverters in the microcontroller.

The R9 Mini, on the other hand, features a SBUS IN pad. This means, however, sacrificing the convenient inverted smart port that the R9 MM has. If you really need receiver redundancy, the R9 Mini is your best choice. At the same time, I think there are only a handfull of people (e.g. expensive yet fliers) that have real good use cases for receiver redundancy, specially in the quad world.

If you have any questions or remarks, please let them know in the comments! 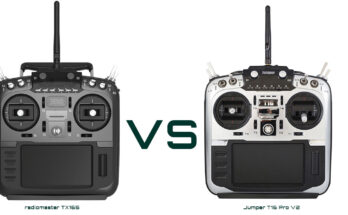 View all posts by Radio Master →

How to update internal Multi-Module on Radiomaster TX16s

How to update OpenTX on Radiomaster TX16s

Should I buy the FrSky R9 MM or R9 Mini?

How to update OpenTX on Radiomaster TX16s

How to update internal Multi-Module on Radiomaster TX16s

Should I buy the FrSky R9 MM or R9 Mini?

Michael - How to update internal Multi-Module on Radiomaster TX16s

I'm new to EdgeTX, that was really helpful!

Marco - How to update internal Multi-Module on Radiomaster TX16s

Hallo. Just switched fm OpenTx to Edge 2.6 and I had to upgrade the internal module 4 in 1 because…

Dan - How to update internal Multi-Module on Radiomaster TX16s

Did u try the top USB port?

Stu - How to update OpenTX on Radiomaster TX16s

Thank you for everything!

Peter Cane - How to update OpenTX on Radiomaster TX16s

Thank you for this clear and concise work on how to update a TX16S successfully. I had to reax and…